How to Take Care of Your Concrete Over the Winter Months 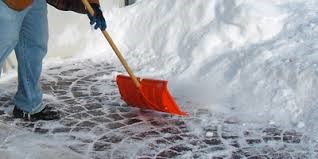 You can help maintain the longevity of your concrete by keeping your driveway, sidewalks and steps clear of snow and ice during the winter months.

Clearing the snow and ice will lessen the chance that it will compact down and freeze into the surface and accelerate the freeze and thaw cycle.  The less number of times that water enters concrete and freezes, the less likely that it will become damaged over time.  If you are using a shovel to clear the snow, using a plastic shovel instead of a metal one is best.  Bent and sharp corners of a metal shovel can damage the surface of concrete.

The common property of all types of deicers is that they are all chemically caustic and have the potential to damage concrete especially after time.  Another potential problem with using a deicer is the damage caused by increased freeze and thaw cycles as previously mentioned.  For example; when a product melts snow and ice, it will enter the pores of the concrete as salty water.  It will refreeze after the temperature drops and will expand into the pores of the concrete causing damage.

One alternative to deicers is to spread sand or fine gravel on the concrete for traction.  If safety is a concern and you must use a deicer then remove the ice and residue immediately after the product has melted the snow and ice.  If you must consistently use a deicer of some type, first protect the concrete with a salt resistant sealer.  There are many sealants available that will protect your concrete from the effects of caustic substances such as salt.   There are also sealants with a grip additive built into them than can increase traction as well.
at December 01, 2017

Choosing the Right Contractor for Your Job

Choosing the right contractor for your home improvement job is extremely important.   If you don’t choose wisely it could cost you m...